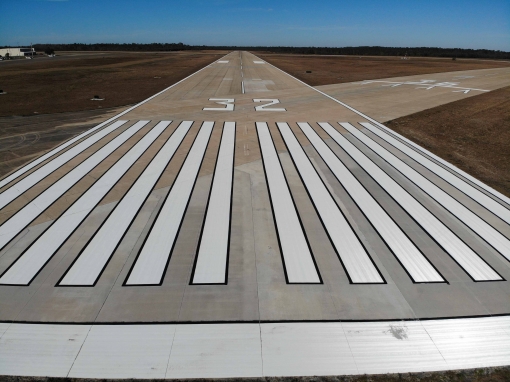 View the embedded image gallery online at:
https://hi-lite.com/our-work/featured-projects/united-states/item/45-app#sigProId38eba7579c
Hi-Lite brought markings back to life at the Apalachicola Regional Airport. The project was executed in 8 days by a crew of 15 airfield maintenance technicians. Two wateblasters, a paint truck, and ancillary equipment were mobilized to Apalachicola to carry out the scope of work. Hi-Lite also performed retro-reflectivity testing before/after as per the revised FAA P-620 specification.

In order to combat the mildew issues in the runway, a special paint with biocide additive was used to paint the new markings. The entire scope of work in the three runways including independent quality control was performed using pre-approved pricing from the Florida DOT Statewide Markings Contract.
More in this category: « SYR, Hi-Lite's Home Airport Love Field International Airport - Sourcewell »
back to top